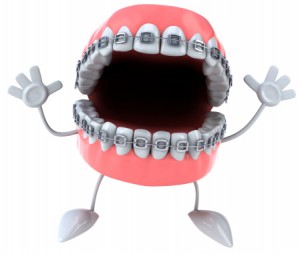 Stuttering is a speech impediment that affects millions of people, from small children to adults. Those who stutter often feel embarrassed in social situations where a lot of speaking is necessary because they can be subjected to ridicule. That is why groups such as the National Stuttering Association and The Stuttering Foundation were founded.  They do everything from offering support to raising awareness, as well as promoting research and letting people know what sort of help is available to them. These groups have been so influential that in 1988, US Congress declared the second week of May as National Stuttering Awareness Week. There are many other speech impediments that affect people worldwide, causing them difficulty in their everyday lives. Dr. Cody Coon, Dr. Justin Coon, and Dr. Donald Coon would like to explain how these speech impediments are actually related to dental development.

A speech impediment is sometimes caused by a malocclusion, or “bad bite.” These malocclusions are sometimes preventable because they form from a child’s bad habit.  For instance, thumb sucking can cause a child to develop an open bite, in which the front teeth do not meet, or a posterior crossbite, where the back teeth on the top of the mouth sit inside the back teeth on the bottom of the mouth when it closes.

Can a Malocclusion Be Fixed?

If someone is born with a malocclusion, or if they developed one because of a bad childhood oral habit that was too hard to break, there are still ways to fix it. Braces are a common solution. Over a period of many months, the wires and brackets that make up braces are adjusted and tightened by an orthodontist, a process that gradually forces the teeth to move. After the braces are removed, the patient often wears retainers to ensure that the teeth stay put in their new positions.
Malocclusions, of course, are not the only cause of speech impediments. Other factors may include genetics, developmental delays, and neurological issues, but we hope you now better understand the correlation between your speech patterns and your dental development.  If you are concerned about a malocclusion, call Grinnell Street Dental in Sheridan, Wyoming at (307) 672-7567.