How Did Pilgrims Brush Their Teeth? 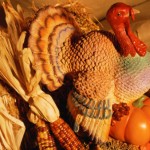 Americans have a lot to be thankful for, and you might be surprised to learn, oral healthcare is at the top of the list. In a recent poll, Americans chose the toothbrush above computers, cars, and even the microwave as a “cannot live without” invention. The toothbrush we know and love today didn’t even hit the U.S. market until 1885. And electronic toothbrushes weren’t widely distributed until the 1960s.

How Pilgrims Brushed Their Pearly Whites

Although the first Thanksgiving gathering happened in 1621, Thanksgiving Day wasn’t an official holiday until President Lincoln declared it in 1863. Today, Thanksgiving Day is the fourth Thursday of November each year. Our early American ancestors were concerned about oral health, just as we are.
Before the invention of the toothbrush, people used bones, feathers, or anything that would get the plaque off their teeth. We think pilgrims used salt to remove grime from teeth. Salt may not sound like a very good cleanser, but it is actually pretty effective. Indians, on the other hand, most likely used herbs, like sage, to remove plaque. Some tribes actually used paste made from the cucacua plant to rub the grime off.

History of Oral Care Products Before Pilgrims Made it to America

Oral health care isn’t unique to pilgrims, the history of dental care goes further back than you might expect. The first recorded toothbrush (that looked similar the modern toothbrush) was made in China around 1498, from hogs’ hair and a bamboo stick.
Toothpaste, however, dates all the way back to 500 BC in India and China. Modern versions of toothpaste did not show up until after the 1850s, when dentists added both soap and chalk to the paste. Shortly after that invention, in 1892, a major toothpaste company began to distribute a paste in a jar.
Dental floss dates all the way back to ancient times, as well. Historians found remnants of floss and toothpicks in the mouths of prehistoric humans. Later, in 1815, a New Orleans dentist re-invented modern dental floss. Dental floss became a patented produced in 1898 when it was distributed in the U.S. markets.

To keep your breath fresh, teeth clean, and to increase your potential for keeping your teeth throughout life, you’ll need more than a toothbrush, toothpaste, and dental floss. Every six months, you need to see your dentist for a checkup and cleaning.
To learn more about your oral health, talk with our dentists today in Sheridan, Wyoming at Grinnell Street Dental. Call 307-672-7567 to schedule your routine cleaning and checkup.